Inside a San Francisco Landmark 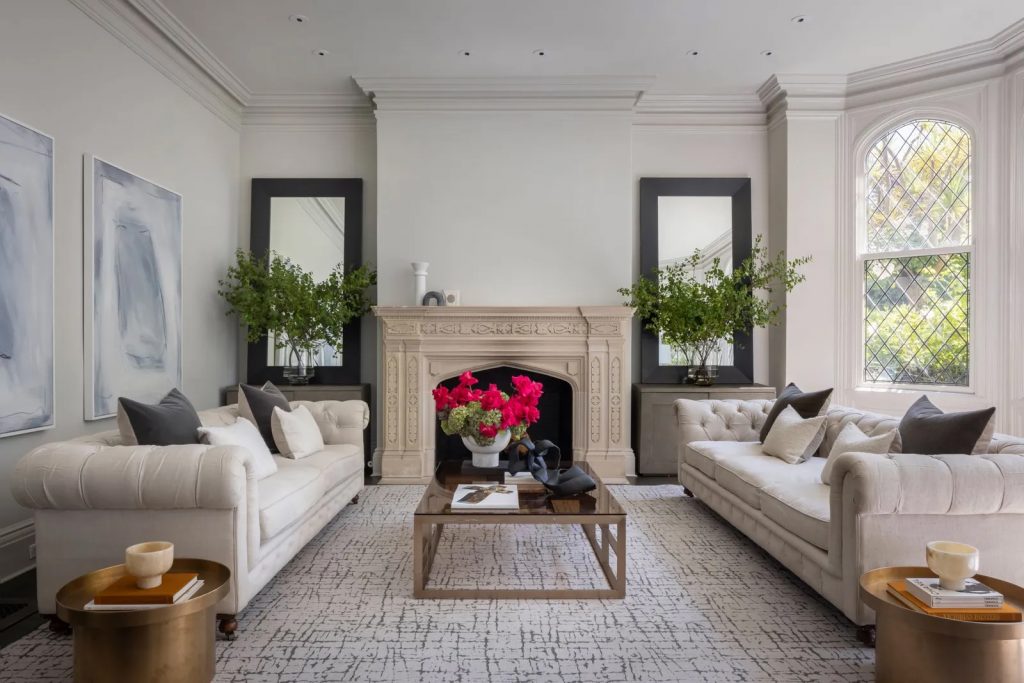 Owning a historic property offers a unique opportunity for an individual to act as a steward of a city’s and nation’s history and to interpret and share that heritage. This early-20th-century landmark in the prestigious San Francisco neighborhood of Pacific Heights affords just such a valued opportunity. Immediately captivating from any vantage point within eyeshot, the striking Tudor Gothic manor has a provenance deeply rooted in the life of “the City by the Bay.” In 1915, one area luminary, M. H. de Young—founder of the paper that came to be known as the San Francisco Chronicle and namesake of the famed museum in Golden Gate Park—commissioned the residence from architect Willis Polk. At the peak of his talents, Polk was widely recognized as one of the city’s most prolific and influential architects and urban planners, a legend in his own right.

While the 8,990-square-foot home has undergone a painstaking renovation by the current owners, vestiges of period aesthetics remain and are readily apparent throughout: the dramatic gray concrete façade, slate-clad gables, stately copper chimneys, an elegantly ornate two-story bay window, diamond-patterned leaded-glass windows and doors, ornamentally detailed fireplaces, intricate moldings, richly hued hardwood floors, and graceful arched doorways. Perhaps its most distinguishing attribute is the curious streetside half arch. Mr. de Young gifted this residence to one of his daughters—Constance Tobin, for whom the manor takes its official name—and intended for a mirroring adjoining home to be constructed for a second daughter, who reportedly chose to live elsewhere, so the twin structure never came to be. The arch still serves a purpose, of course, leading to a breezeway that accesses the rear grounds—roughly an eighth of an acre of verdant lawns, flourishing colorful gardens, and sun-washed terraces. 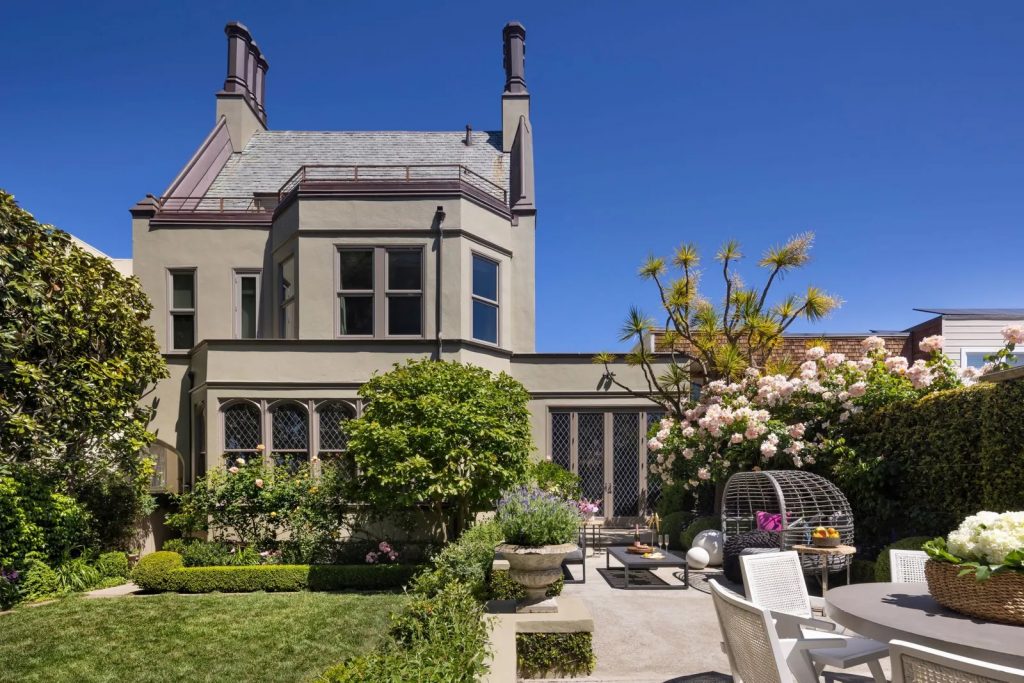 While the home’s main level is dedicated to entertaining—a light-filled living room, a formal dining room with an eye-catching fireplace, a sitting room with floor-to-ceiling leaded-glass doors opening to the enviable garden, and a spacious modern kitchen with a butcher-block-topped island, plentiful cabinetry and other storage, top-caliber appliances, marble countertops, and a built-in dining banquette—the upper levels, reached via a barrel-vaulted staircase, are devoted to the private quarters. 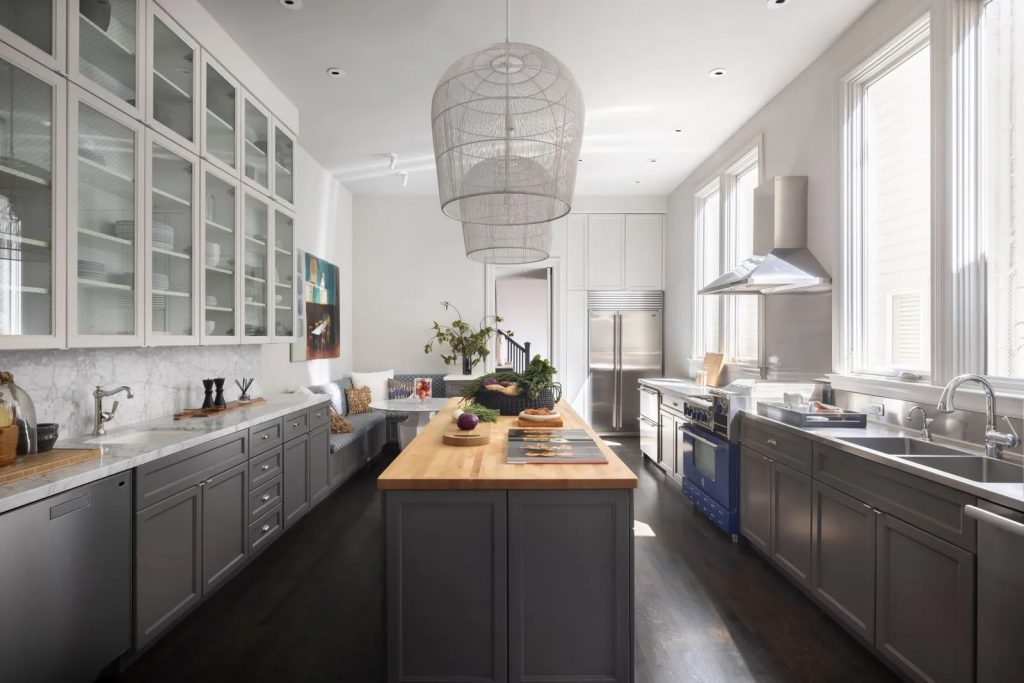 The peaceful owner’s suite occupies some 1,000 square feet of the second floor and boasts a wall of south-facing windows, a warming wood-burning fireplace, a private terrace, a large library or sitting room, and luxurious bath with a glass-walled shower and a soaking tub. On the third level, two bedroom suites share a lofty sitting room with a vaulted skylit ceiling and useful built-ins; each suite benefits from a walk-in closet and a private terrace for surveying the rarefied environs of Pacific Heights. The lower level is a delightful, versatile space with an entertainment area, a gym or recreation room with a wet bar, an office, abundant storage, and a full bath. 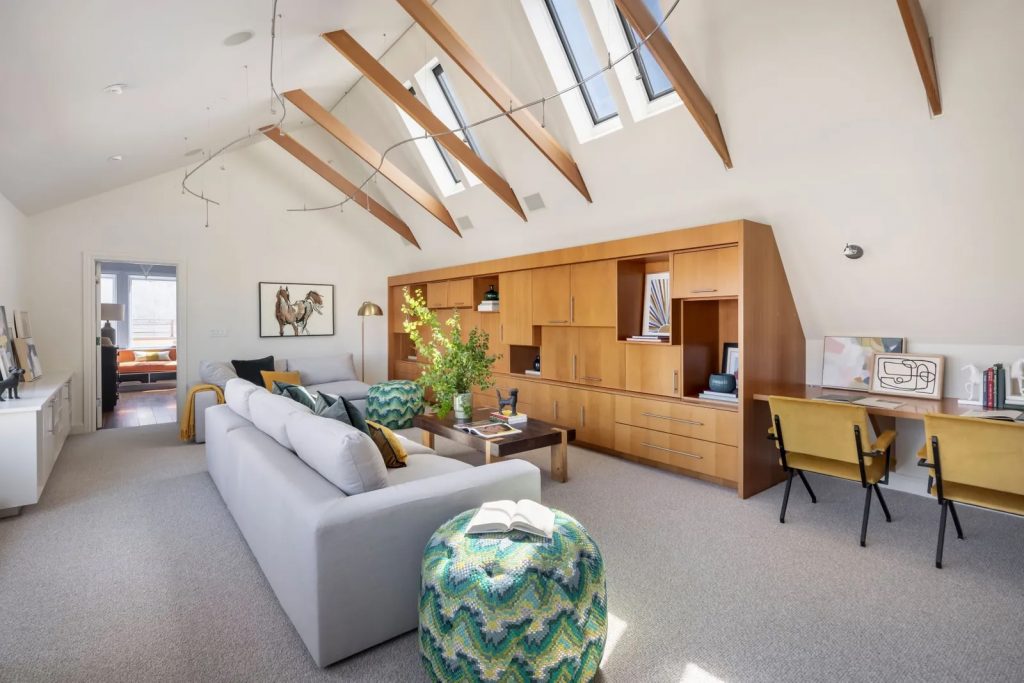 The home’s undeniable classicism notwithstanding, contemporary comforts and conveniences have been attended to: a gym, a wine room, superior appliances, and automatic security gates that offer access to the three-vehicle carport. A multizone alarm system, a sophisticated camera system, and a whole-house sprinkler system provide peace of mind for the discerning buyer who chooses to steward this residence well into the 21st century and its continuing role as a San Francisco landmark.