Inside a Waterfront Home in West Palm Beach 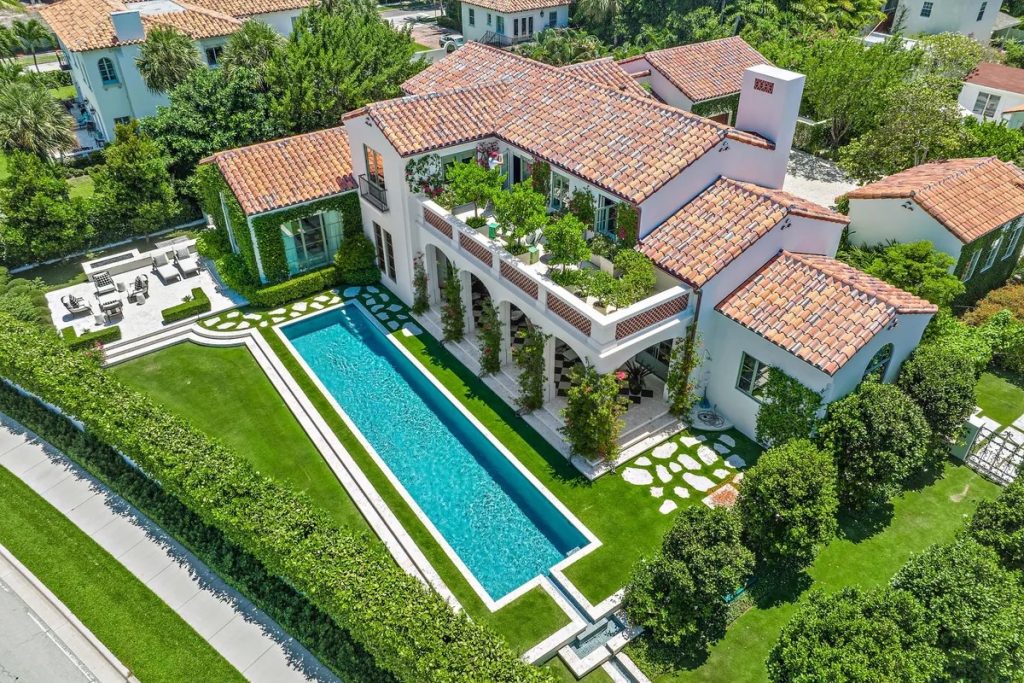 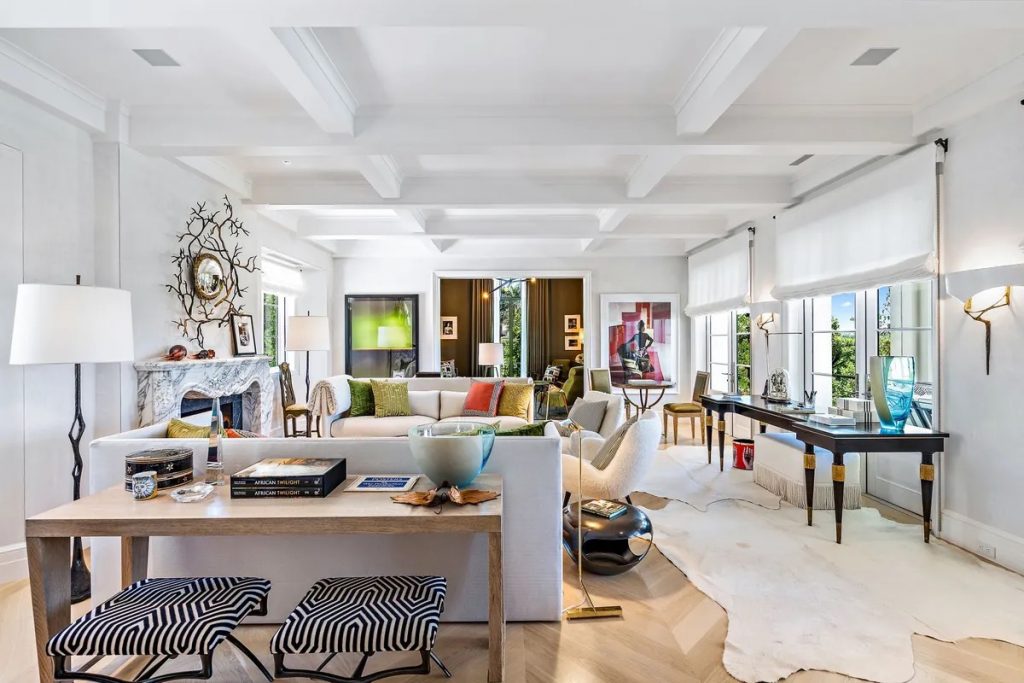 Sited on a nearly 19,000-square-foot lot with 133 feet facing the Intracoastal Waterway, this 2020-built property looks perfectly at home amid its more historic Mediterranean Revival–style neighbors. The owners took great pains to ensure that the home’s architecture references the classic details of landmark El Cid properties—but in a clean contemporary way. 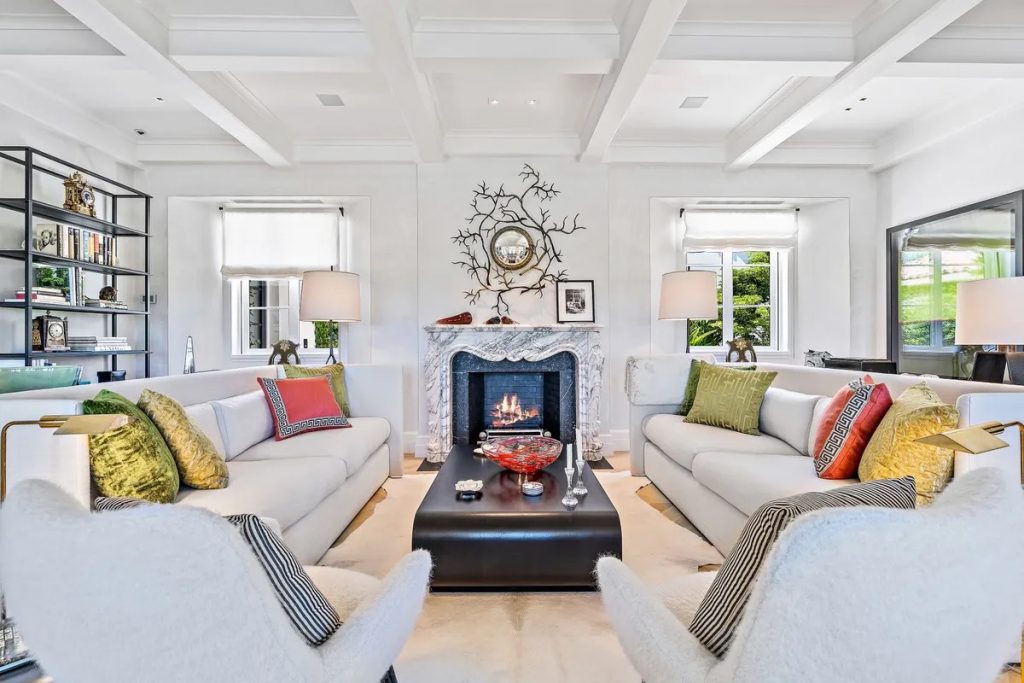 No modern luxury has been overlooked. The estate has a whole-house gas generator, a 52-foot lap pool with a heater and chiller, an elevator, a state-of-the-art security system, and a plethora of smart-home controls that permit the owners to raise and lower sunshades and manage other systems from anywhere in the world via smartphone. Situated on a high corner where Flagler Drive bumps east toward the Intracoastal, the house enjoys unimpeded views of the water from nearly every room, both upstairs and down. 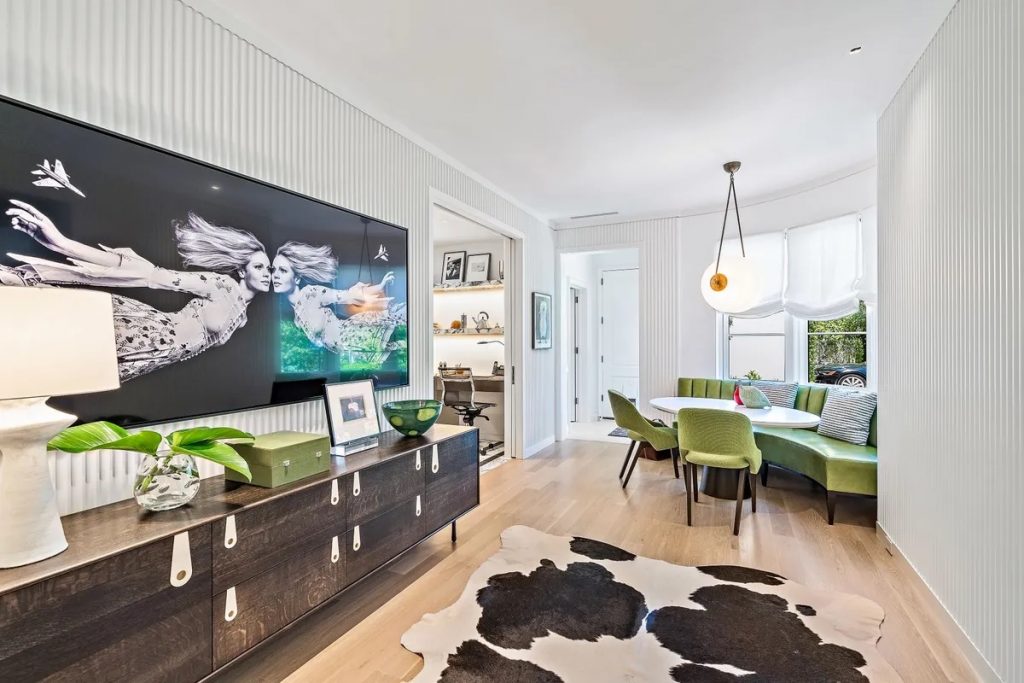 On the main level, a dazzling light-filled living room with a coffered ceiling and herringbone-patterned white oak flooring opens to a terrace with motorized screens and a view of the pool and waterway beyond. The sunset-hued dining room has long windows that amplify the views and capture soft breezes off the water. 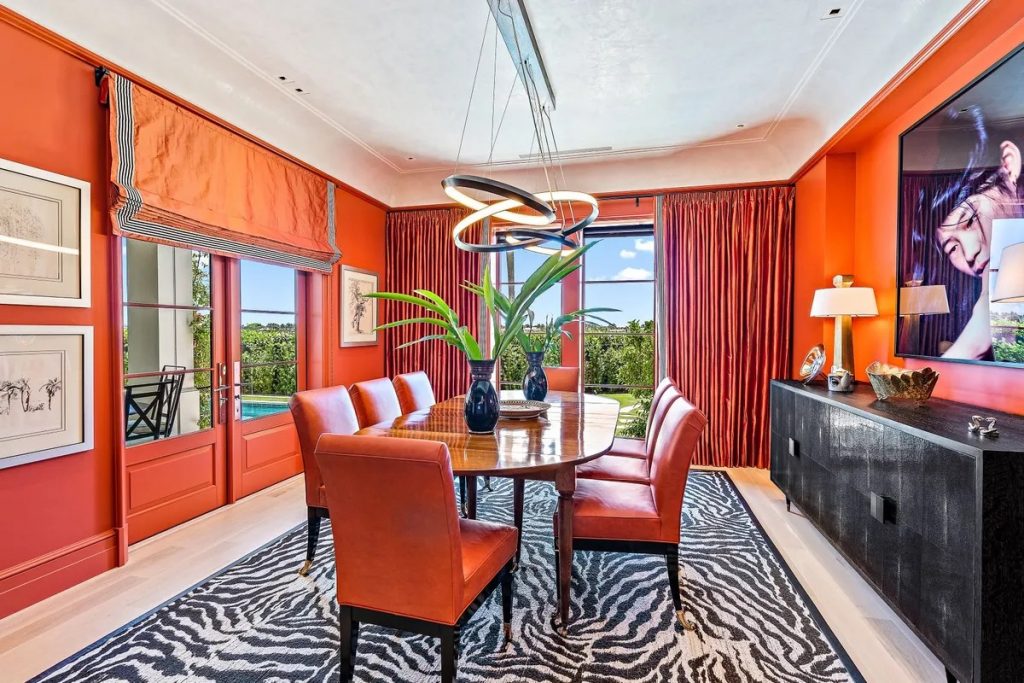 With its striking stone-topped island and stainless-steel appliances from Miele, Wolf, and Sub-Zero, the Italian-made Boffi kitchen is a home chef’s dream—with an induction range as well as a gas stove, two dishwashers, and a summer kitchen just outside with a Lynx gas grill and rotisserie. An adjacent casual dining alcove, nestled into a bay window, enjoys views of a charming maze garden—just one of the picturesque scenes dreamt up by celebrated landscape architect Keith Williams. 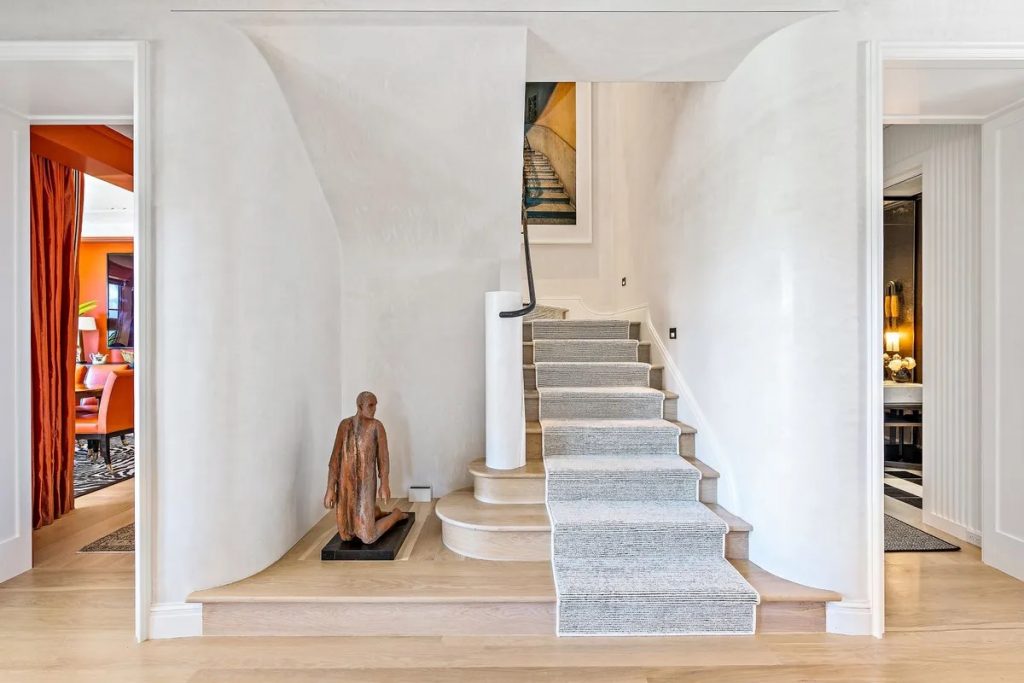 A crisp and airy refuge, the first-floor primary bedroom has a soaring cathedral ceiling and French doors opening to a waterfront terrace with a firepit. But what lies beyond its spacious dressing room and marble-clad shower is an indulgent paradise. A small glass door next to the vanity opens to a fenced Zen garden with a pebble-floored outdoor shower, a bubbling fountain, and a mature buttonwood tree brought in for leafy shade. 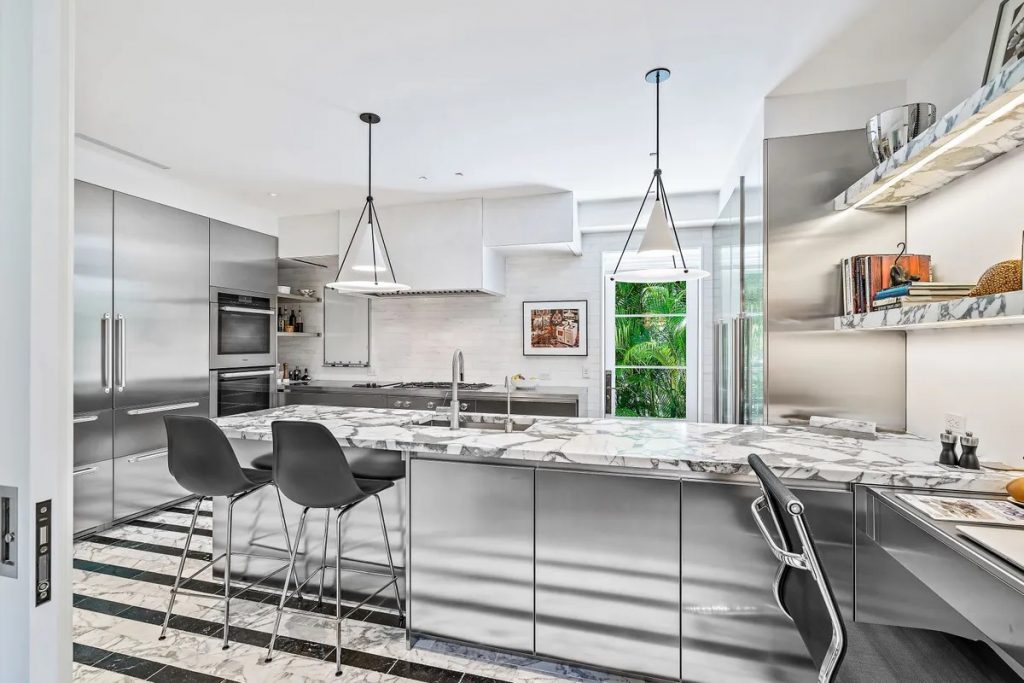 The stairway to the second floor ends in a landing with French doors that lead out onto an expansive terrace. An upper-level guest suite has a pitched ceiling and a full bath. A second large guest room, currently used as a study, features a long built-in desk overlooking the water. The adjacent storage room could easily be repurposed as a small bedroom or home office. 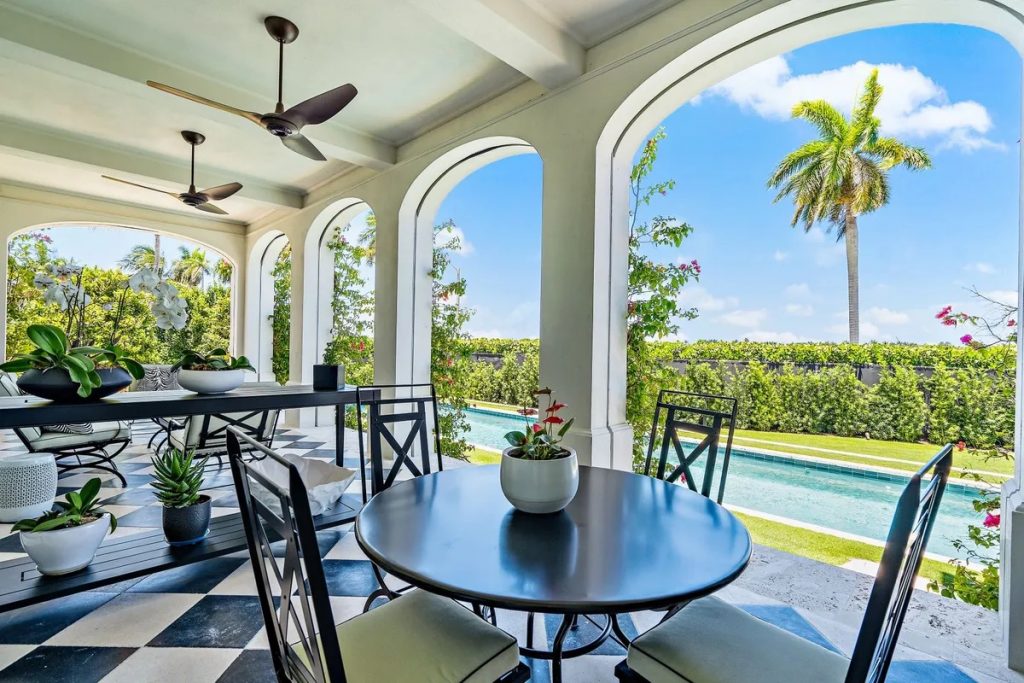 The property also includes a guesthouse—sited in a quiet, private position beside the residence—that can be configured as a gym, office, or bedroom with a full bath. At the end of the motor court, a bougainvillea-draped three-bay garage is equipped with an electric-vehicle charger and two lifts, allowing it to accommodate up to five vehicles. 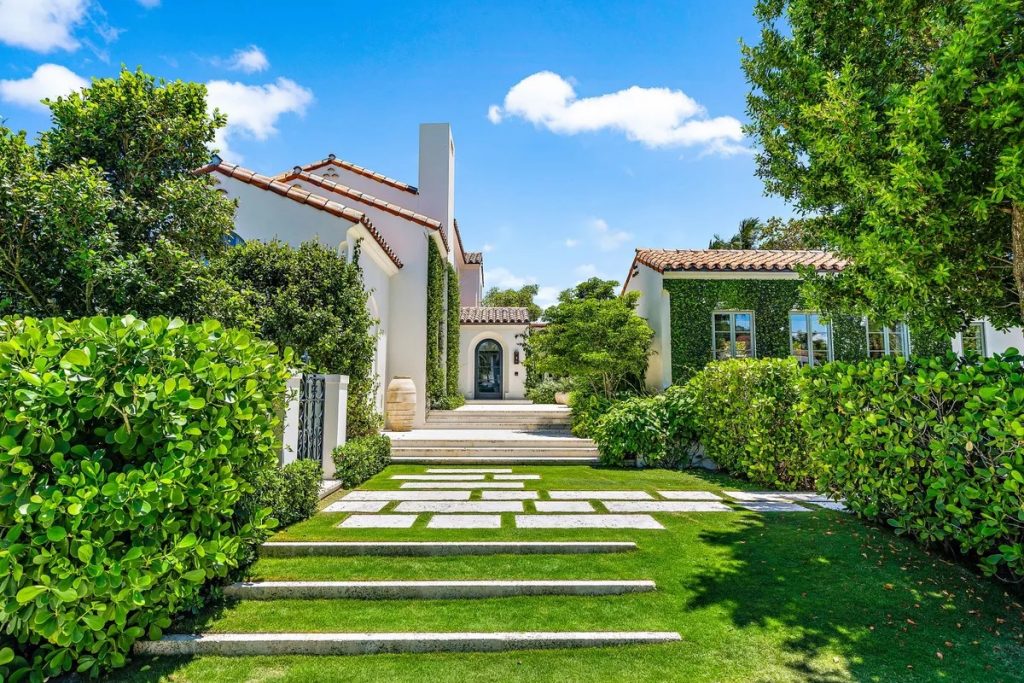